A Guest Post for Curious Meerkat by Erica McAlister

I have just finished four weeks of fieldwork collecting insects in Dominica. I can’t really complain about that except that the fieldwork did not follow my usual routine. Generally when employed at The Natural History Museum your fieldwork is either part of a general collecting trip hoping to find as much as possible (work with Dipterists Forum); part of a research focused group (me collecting flies from Potatoes in Peru); or part of a consultancy project (Mosquitoes in Tajikistan). However this trip was different, I wasn’t marauding around the countryside with collector’s glee, this time I had to teach as well as collect.

It’s not the first time I have taught students. I lectured for a while before joining the museum and was involved in a tropical ecology field course in Costa Rica for several years. However that was university students and they were mostly master’s students who already were interested in Entomology. I had never taught or been involved with younger people – teenagers as I believe they are called. That had previously sounded like a mild form of torture! Could they concentrate? Would they even be interested?

But that changed when I received an email from Operation Wallacea, the organisation running the show. They have field sites all over the world including Indonesia, South Africa and now, in its second year, Dominica. Their aim was actually to pair Secondary School students (Year 11/12/13), from predominantly the UK and US, up with scientists who are carrying out research projects in the field. Would I be interested to go to the Caribbean for 7 weeks and do this? Ohh, the Caribbean you say? I had not done any fieldwork there and I knew that the collections would benefit from sampling in this region. And then when I looked up Dominica, the habitat, position etc and I was a goner. I couldn’t leave work for the whole time so we agreed four weeks (a hardship I know). I would mentally deal with the 200 or so students later on when I had finished planning in my head all of the wonderful things that I would be seeing or expecting to find, as well as hopefully a whole trunk full of undescribed species.

So I prepared and as I did so I realised that this was not going to be as simple as I first thought. I was going with the aim of conducting a baseline survey of the island. Obviously this would not be comprehensive but as there was so little known about the invertebrate fauna there was a lot to gain from doing this. This meant running around actively collecting as well as establishing static collecting sites at various plots. I therefore needed enough equipment for groups of 10 students at any one time. My luggage therefore consisted of 10 sets of sweep nets, a microscope, pooters, malaise traps, intercept traps, tubes, universals, labels and maybe one pair of knickers (OK so I got a few more but only by squeezing them down inside all my sampling bottles).

I then started to actually think about the students themselves. What would they be expecting? What would they know? I have been so immersed in the world of the invertebrates and natural history that I forgot that not everyone knew about the class Chilopoda or the family Dolichopodidae. I would have to find keys and work out suitable presentations. But I was confident. The love of insects (mine) would conquer all.

Off I set and I arrived in a tiny plane that flew over the ocean to a runway that ran perpendicular to the beach heading straight for the rainforest. We drove across the island and I had my first glance at the rainforest. 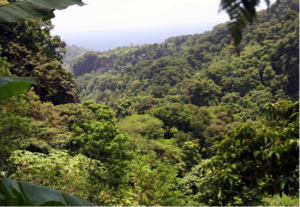 And there was a lot of it! I was very excited. I spent the first three days getting organised and sorting out some static samples and then my first cohort arrived. There were hundreds of them (ok about 40) – mostly young and blond. My taxonomic skills were put to the test. I failed. I can remember hundreds of Latin names but humans; well I was never very good at that.

Our first day was involved in orientation. We split the schools into 4 groups and sent them round the various researchers to learn what they would be involved with. Alongside me there was a freshwater invertebrate ecologist, a bat surveyor, two bird surveyors and a lizard botherer (environmental gradients and lizard populations). Now I have been sweep sampling for years and so think nothing of it. Obviously the whole part of sticking your head in a net and watching everything drop down onto your face and hair passed me by when I had planned this demonstration. Oh the screaming. From both sexes just in case you were wondering. Never had these students actively got so close to the microworld before. During the next four sessions I also realised that when people are slightly panicked they react in a very odd way. To use a pooter you have to remember which end to suck from and which end not to. If you forget this basic component you will be sucking up insects and spiders into your mouth. However, at the end, when it comes to the knocking down of the invertebrates in the pooter, you have a different instruction. A piece of tissue that has been immersed in Ethyl Acetate is placed up the shorter end ,which is the end where the insects are sucked up, and then you blow hard to send this into the main chamber. However, as I said, slight hysteria causes people to do strange things and this was sucked up by several of the students. It won’t cause any long term issues…

The second thing that struck me was actually the students really did not know anything about my world. What was an insect? Don’t know; what is the difference between a bug and a beetle? Don’t know; what do you think that insects are important for? Don’t know. Hmmm. My work was cut out for me. So I began that week with major apprehension and an underlying concern that the students would not like something that I lived and breathed. I should not have worried. 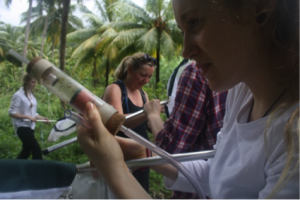 Ali, my amazing driver, tour guide, island guru, twitcher and great botanist was with me all the way and each morning I would rock up to his minivan –
‘Ali’
‘Yes Erica’
‘Where shall we go today?’
‘What do you fancy?’
‘I’d like some rainforest’ or ‘I’d like some cloud forest’ or ‘where is a nice beach location (well I had to!)’

And each day he would find me the habitat. So the students armed with equipment would pile in the back and we would head off across this most beautiful of islands. To say that it ran smoothly would be a lie! Setting a load of students off with nets and pooters was not the easiest thing to do.

My instructions were, if you fell over; 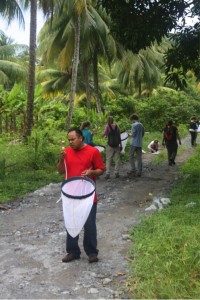 Obviously I had a few things to learn about this teaching malarkey. (Disclaimer – I am joking honest ;) – there were proper teachers on hand to ensure that everything was done above board and no one injured themselves)(Apart from me that is).

I won’t lie – the samples were smaller than I expected. Again I had to step back from myself and try to remember the first time that I entered this strange world. I presumably was useless at the ‘poot’. And there were ten of them so overall the numbers wont so bad. However, more importantly I registered something else – that during the mornings sampling in the field something happened. And it phenomena was not unique to the first day, or the first week but across the whole of the four weeks I saw this happen with every group – the students, once they started, started enjoying it. Every bit about it – from the part where I told them what was in the pooter, to the knocking down, to the habitat descriptions (OK so you can only hear so many times when you ask people to describe the habitat the word green…..). From near hysteria at their first sweep and poot to field biologists determined to collect. It was not universal, there was one or two in each group who never found the love but overall I sensed a revolution.

And that was just the collecting. The absolute look of satisfaction of pinning or the gushing at seeing the palps of the spiders down a microscope was amazing to see. 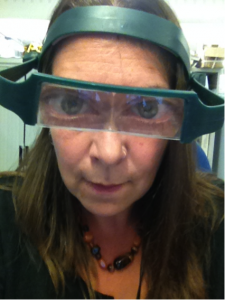 My first week was all over the place and so the afternoon pinning sessions where chaotic to say the least. But there were always massive insects, such as bush crickets, to hold their attention. And then there were the special glasses. No one feels more like a science nerd than wearing the special glasses. A fair number of selfies were taken in those little beauties. They are essential attire when micro-pinning, however.

And one of the reasons that they liked it so much was that they felt that they were really contributing to something. The specimens that they had collected and they had pinned were to go to the collections at The Natural History Museum in London as well as some of the material be returned to help Dominica look after and monitor their biodiversity.

The second week I changed the orientation phase and instead took the students straight to the lab for a PowerPoint to go through the various groups we were likely to encounter. I also now had actual specimens for them to see. Now they were armed with the basics to start selectively sampling in the field. No more immature bugs for me I thought- sadly that was not the case as bright red things are always attractive to catch irrespective of what part of their life cycle they are at! 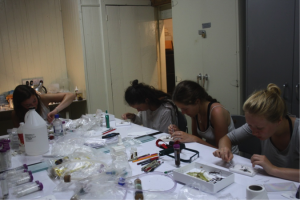 And it wasn’t just in the field that the students were catching material. I now had students picking up anything and everything and leaving them under jars in the lab for me to discover in the morning. I would be handed plastic bags at breakfast that contained insects found in their rooms at night.

By the end of the four weeks I may not have collected from every habitat that I wanted (getting students to sweep on active sulphur vents or across boulders under a waterfall) but I did collect from a huge range. They may have not collected as well as seasoned entomologists but there were hundreds of them so overall the bounty was plenty.

But most importantly for me actually was that they were inspired. (I was regularly informed that I was inspiring which is amazing considering my conversations ranged from using faeces to collect samples to ripping off the genitalia to enable species-level descriptions). A group of students who had no previous interest in insects now all wanted to come back to the museum and see what happened to their samples – to learn how they would be used in research and how their efforts maybe would have added new species to science. The collection at the NHM became real to them and they understood why it was important to go out there and collect.

My job was done. 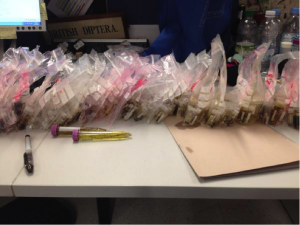 All images in this blog are copyright of Erica McAlister, used with permission.

Why Are We So Obsessed With Ivory?

Is There Such a Thing as Sustainable Fishing?