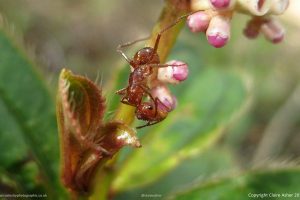 How Strong Would a Man-Sized Ant be?

It is well known that ants are exceptionally strong and fast. Although estimates vary, the average ant can carry between 10 and 50 times its own body weight, and run at approximately 300 meters an hour, a rate of nearly 800 times its body length a minute. This is equivalent to the average western man carrying between 850 and 4500kg (4.5 tonnes) over his head, and running at a speed of 83km or 52 miles per hour. If ants can do it, why can’t we?

The calculation above is essentially redundant, because a human-sized ant wouldn’t be able to travel at 50 miles an hour, in fact it wouldn’t be able to run at all; its legs would crumble under the weight of its own body. In fact, the human-sized ant would have been dead long before it tried to run, because the supply of oxygen to its organs wouldn’t have been sufficient to keep it alive, even for a second.