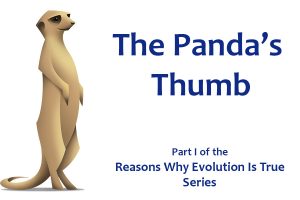 Pandas are crap. They might be cute, cuddly and charismatic, but the simple fact is that they’re really pretty rubbish at being pandas. You might think that being good at being a panda would be a fairly important trait for a panda to possess, but sadly these beautiful animals are victims of evolutionary history. Giant pandas are members of the bear family, and they evolved from a common ancestor with other bears during the late Pleistocene, approximately 600,000 years ago. Bears are members of the Ursidae family, within the order Carnivora, and as the name suggests, almost all bears are meat-eaters. That is, except the panda. Bears have evolved a club-like paw, with limited independent movement of their digits, which is excellent for attacking live prey. Pandas, having evolved from a carnivorous, bear-like ancestor, share this adaptation, despite no longer eating meat. Bamboo is particularly difficult to grasp without a thumb. And Pandas need to consume an awful lot of bamboo to survive: about 40kg every day.