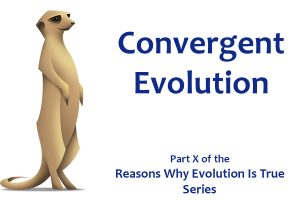 When you design many objects that perform similar tasks, the logical strategy is to reuse the same design, perhaps with small modifications, for each object. There would be little point in coming up with a new design every time, right!? In nature, however, there are many species that do similar things but have arrived at their method through different designs. This is known as convergent evolution.

Intelligent design, and decent by modification, predict different patterns of similarities and differences between species. Evolutionary theory, which places all living things on a tree of relatedness, leads us to expect that species that are more closely related to each other should tend to be more similar. This is because they have both evolved from a recent ancestor. This ancestor has been ‘modified’ in various ways by natural selection to produce the two (or more) daughter species, but with a shared starting point for these modifications, we expect a fairly similar outcome. Traits that are shared between species due to shared ancestry are known as homologies. Homology has been the basis for determining relatedness between species (phylogeny) for hundreds of years. However, as early taxonomists noted, there are some occasions when species share traits despite the lack of a recent common ancestor. Often these species have reached a similar solution to a shared problem, despite being only very distantly related. This is known as convergence, and the more we look for it in nature, the more we find.