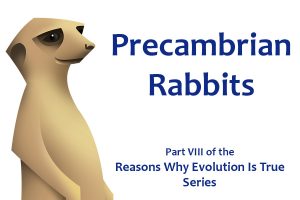 The fossil record is one of the most obvious pieces of evidence for evolution. Fossils have been known since human history began, and Aristotle first noted the similarity between fossils and living animals, leading him to conclude that fossils represented deceased creatures, a view supported by Leonardo da Vinci. By the 19th century, people were increasingly beginning to appreciate that some fossils represented extinct animals, and that their positioning in the rocks appeared to represent that passage of time. Now there is also ample evidence from molecular genetics and radiometric dating that the fossil record does represent the evolutionary history of life on Earth. Despite this, creationists still continue to argue otherwise. Some have suggested that the fossil record represents animals killed during one or more biblical floods, however this is incongruent with the evidence available.