One of the best things about this time of year is that faint possibility that it might snow. The promise of snowmen and snowball fights, of time of work and school, of that cheer that only snow can bring, is almost enough to get us through the long, dark, bleak winter. They say no two snowflakes are alike, and although some pesky scientists have proved that incorrect, the intricate crystalline structure of snowflakes is truly beautiful. Snow is also hugely important for wildlife and people, and plays an important part in keeping our climate stable. To say Merry Christmas from Curious Meerkat this year, here’s a look at the science of snow – from its formation to its recreational uses and its role in the healthy functioning of Planet Earth.

Snow is simply a form of frozen rain, or precipitation, which occurs when cloud temperature is at or below freezing. Snow crystals tend to form in heavy, moisture-rich clouds, containing dust particles. Ice crystals form around these dust particles, called ice nuclei as the water vapour in the cloud slowly condenses. Snowflakes can be formed from multiple crystals that have melted slightly and fused together, or through new water vapour condensing onto existing crystals. As ice crystals grow inside the cloud, they get heavier and heavier until eventually their weight causes them to fall from the cloud. If the air temperature at the ground is low enough (below about 2°C), these crystals will remain frozen all the way and land on the ground as snow. Often, snow flakes that form in the clouds will have melted by the time they reach Earth, and all we see is the rain that results.

END_OF_DOCUMENT_TOKEN_TO_BE_REPLACED 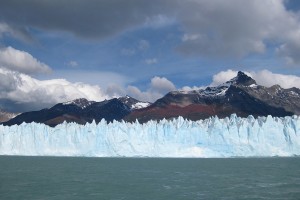 The Hows and Whys of Glaciers

If you have ever been fortunate enough to see a glacier up close, it is hard not to be struck by the sheer scale of this huge ice formation. How can something so enormous have formed, and how is it possible for these huge structures to move? There are numerous examples world wide of the effect that glaciers can have on the landscape as they move, grow and retract, carving new shapes out of solid rock. But how can ice alone be responsible for such dramatic changes?

Glaciers form in areas where snowfall exceeds melting, and so snow is present on the ground year-round. As new snow falls it covers and compresses previous layers, transforming snow into ice; the weight of new snow causes older layers to re-crystalise. Over time these ice crystals grow larger, and in ancient glaciers the crystals can grow to several inches in length. Freshly created glacial ice is white, but as it becomes more compact over time it takes on a deep blue tinge. It is the high density and extreme weight of glacial ice which is responsible for its extreme terrain-shaping capabilities.

Glacial movement is caused by the sheer weight of the glacial ice, which causes stress on the ice sheet. Glaciers usually form into an accumulation area, where snowfall is high, and an ablation area, where most melting and evaporation occurs. When these two processes are in equilibrium, the glacier is balanced. Changes in snowfall or melting will cause the glacier to either advance or retreat, which is why glaciers are so vulnerable to climatic changes. But exactly how is solid ice capable of ‘flow’ similar to liquid water? The answer to this comes from a quirk in the chemistry of water. For most substances, as pressure increases, melting point decreases, causing them to become more stable. This is not the case for ice; the melting point of water decreases as pressure increases. The high pressures exerted on ice at the base of a glacier, combined with heat released from the earth itself causes this ice to melt. Small quantities of liquid water at the base of the glacier allow it to slide over the land.

Glacial movement causes the development of huge crevasses in the ice sheet, as well as grinding up rock and soil underneath the glacier. Debris can be carried huge distances by the movement of the glacier. Dark bands of debris in the ice, known as moraines, are evidence of this transport. While glacial movement typically occurs slowly, over periods of hundreds or thousands of years, in some cases movement can be much faster. The Kutiah glacier in Pakistan holds the record for the fastest recorded glacial movement, advancing 12km in just 3 months during one glacial surge!

At present, around 10% of land area (15,000,000 km2) on Earth is covered by glacial ice, containing about 75% of the world’s fresh water. Almost all of this ice is contained within huge ice sheets in the polar regions, however glaciers are found on every continent except Australia. The ice sheets in the polar regions are particularly ancient, and the antarctic ice sheet has persisted for at least 40 million years.