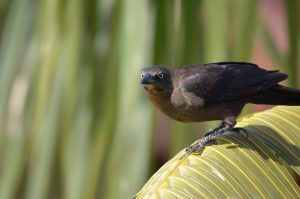 Corina Logan from the University of Cambridge gave grackles two novel tests – one using stick tools, and another using string pulleys to access food. But unlike other intelligent birds, the grackles were unable to solve these problems on their own. This unexpected finding suggests that flexibility and innovation – often considered to be one and the same – are in fact separate facets of intelligence, Logan says.

Unlike birds like crows, rooks and parrots, no grackle thought to use a stick, pull vertical strings to access out-of-reach food, even when a human demonstrated the solution for them. Logan gave the grackles a third test – dropping stones onto a platform in order to release food – and found that although grackles never came up with the solution themselves, most birds could learn after some training.

Far from being a single trait, behavioural flexibility is a multifaceted characteristic, which includes both plasticity when facing changing circumstances, and innovativeness. This study shows that these two traits are not interchangeable, and suggests that species that cope well with change will not necessarily be adept at solving new problems.

The costs of a big brain outweigh the benefits