The Ig Nobel Prizes is one of my favourite events of the year, and this year the winning research is particularly great. On the 14th September, The 27th First Annual Ig® Nobel Prize Ceremony & Lectures took place at Harvard University in Massachusetts. In case you’re not familiar with the awards, they were set up in 1991 to celebrate research that makes you laugh, and then makes you think. Here are this year’s awards:

Physics Prize – Marc-Antoine Fardin, for using fluid dynamics to probe the question “Can a Cat Be Both a Solid and a Liquid?“

In his revolutionary paper, Fardin notes that feline species could be regarded as simultaneously solid and liquid, because they tend to adopt the shape of whatever container they are in – a key property of liquids. The paper explores how to calculate a cat’s ‘Deborah number’ – a term used to describe how fluid a liquid is.

“If you take a timelapse of a glacier on several years you will unmistakably see it flow down the mountain. For cats, the same principle holds. If you are observing a cat on a time larger than its relaxation time, it will be soft and adapt to its container, like a liquid would.” – Marc-Antoine Fardin (Université Paris Diderot), winner of the Physics Prize told The Guardian

Based on anecdotal evidence from Alex Suarez’s own experience, the team conducted a randomised controlled trial on 25 patients, and found that taking up the didgeridoo reduced snoring and eased the symptoms of sleep apnoea. They suggest it may be due to the effect of didgeridoo practise on tongue muscles, and in reducing ‘fat pads’ in the throat. Alex Suarez played didgeridoo on stage as part of the team’s acceptance speech, which was given in pjs. 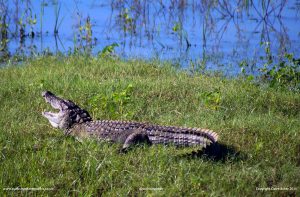 Economics Prize – Matthew Rockloff and Nancy Greer, for their experiments to see how contact with a live crocodile affects a person’s willingness to gamble.

To investigate the effects of excitement on gambling, Rockloff and Greer made use of locally available ‘excitement’ in Queensland, Australia, and investigated the effect of contact with a live crocodile on tourists’ willingness to gamble. Over a hundred visitors to Koorana Saltwater Crocodile Farm in Coowonga were asked to play a gambling game on a laptop, either before or after having held a 1m crocodile on the ‘Crocodile Tour’. They found that gamblers that reported few negative emotions tended to bet more after holding the crocodile, while those who reported more negative emotions placed lower bets after the crocodile encounter than before.

Anatomy Prize – James Heathcote, for his medical research study “Why Do Old Men Have Big Ears?“

Testing the age-old question, “do old men have such big ears?”, Heathcote found that our ears do seem to grow throughout life, on average becoming about 2mm longer each decade. Although we still don’t know exactly why, it seems gravity is likely to blame.

“Have you ever sat on a bus and noticed that the old man opposite you has very big ears? Once you’ve spotted it, it is impossible to imagine those enormous ears on a younger man. So they must have grown. Twenty years ago we set out to prove this by measuring the ears of two hundred and six patients,” – James Heathcote (GP), winner of the Anatomy Prize, said in his acceptance speech.

Biology Prize – Kazunori Yoshizawa, Rodrigo Ferreira, Yoshitaka Kamimura, and Charles Lienhard, for their discovery of a female penis, and a male vagina, in a cave insect.

In one of the more memorable papers of 2014, Kazunori Yoshizawa and colleagues reported the discovery of a bizarre sex system in a group of Brazilian cave insects that the authors refer to as “female penis, male vagina”. Females in the genus Neotrogla have evolved an elaborate penis-like organ called the gynosome, which they use to anchor themselves in position during sex. They noted that in a case of correlated evolution, males of these species have also evolved a complementary ‘vagina’. The gynosome is covered in spines, which are specifically designed to fit to complementary shaped pouches in the male vagina. Sex in these unusual insects can last between 40 and 70 hours, which might explain why such a complex anchorage system is needed. During copulation, the male transfers sperm and nutrients into the female through the gynosome. This is unlike anything that has been found before. The authors couldn’t attend the ceremony, but instead gave a video acceptance speech – filmed in a cave.

Fluid Dynamics Prize – Jiwon Han, for studying the dynamics of liquid-sloshing, to learn what happens when a person walks backwards while carrying a cup of coffee.

Winning the prize for his 2016 study on fluid dynamics in a cup of coffee being carried backwards (a situation that I’m sure is very common in reality), Jiwon Han was still a secondary school student when he wrote the paper.

Nutrition Prize – Fernanda Ito, Enrico Bernard, and Rodrigo Torres, for the first scientific report of human blood in the diet of the hairy-legged vampire bat.

The hairy-legged vampire bat, Diphylla ecaudata relies soley on blood for food, but was thought to be a specialist, feeding only on birds. However, by looking at the DNA in blood meals taken from the species in the Caatinga forests of Northeast Brazil, Fernando Ito and his colleagues discovered they are more flexible than once thought, feeding on cattle and humans too. This suggests their feeding habits are more flexible than thought, and in the Caatinga where birds are relatively scarce but livestock and humans are common, this flexibility has led to new behaviours in D. ecaudata.

Medicine Prize – Jean-Pierre Royet, David Meunier, Nicolas Torquet, Anne-Marie Mouly and Tao Jiang, for using advanced brain-scanning technology to measure the extent to which some people are disgusted by cheese.

The team identified the brain circuits involved in hating cheese – people were asked to smell cheddar, goat’s cheese and gruyere while in an MRI scanner. The basal ganglia turns out to be the source of cheese disgust.

The team found that identical twins recognise photos of themselves and their twin equally – they cannot tell themselves apart, although this depended to some degree on their personality type and how similar to their twin they felt overall.

The authors have also patented a device called a Babypod, and I think based on the results of their research, you can probably guess what it does.

“If you didn’t win an Ig Nobel prize tonight – and especially if you did – better luck next year.” – Marc Abrahams, founder of the Ig Nobel awards, and editor of ‘Annals of Improbable Research’

You can see the full ceremony on YouTube, the prize announcements start at 14 minutes in.

Genomic Evolution of Our Feline Friends

Tibetans evolved to cope with UV