Calcium-based skeletons appeared suddenly in the fossil record around 550 million years ago, fundamentally changing the global carbon cycle and introducing a wealth of new predatory strategies to the sea.

END_OF_DOCUMENT_TOKEN_TO_BE_REPLACED 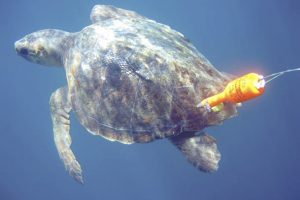 What do those cute little baby sea turtles do after their epic sprint to the water? Until very recently, we simply didn’t know. Nobody had been able to study the movement of juvenile sea turtles in natural conditions – they were simply too small and too difficult to track. But a new study reveals for the first time just what the young turtles have been up to in the Pacific ocean – and it shows that they are just as determined and tenacious as they were on land, fighting strong currents to reach their preferred feeding grounds.
END_OF_DOCUMENT_TOKEN_TO_BE_REPLACED