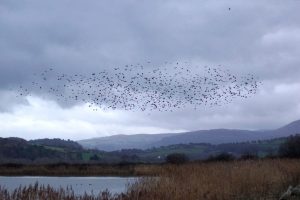 Climate change is causing spring to arrive earlier in much of North America, but this advance is not happening uniformly across many bird’s  migration routes.

END_OF_DOCUMENT_TOKEN_TO_BE_REPLACED

Wallabies living near humans breed later in the season, potentially missing valuable resources that could mean the difference between life and death for their growing offspring.

New research published last month in Proceedings B that found that light pollution in Australia is putting the tammar wallaby (Macropus eugenii) out of sync with the seasons. Robert and colleagues from La Trobe University in Melbourne studied wallaby breeding near urban areas and in natural bush, and found that human light pollution prevents the marsupials from responding to light cues that normally signal the start of the breeding season. Wallabies living near humans had lower levels of melatonin, a hormone linked to the sleep-wake cycle, and gave birth on average 27 days later than wallabies in wild conditions. The authors say that this may lead to a mismatch between the birth of young wallabies and food availability.